Giving Every Child A Voice

ETM believes music education as a core subject work as a catalyst to improve academic achievement, motivation for school and self-confidence. Music education provides the tools necessary for students to succeed in school and life. 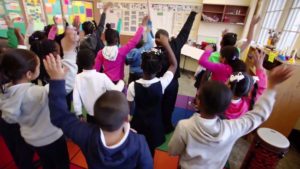 This year, ETM’s program is reaching a record number of children across all five boroughs of New York City. Our teachers are working hard each and every day to give all of their students a voice.

For Michael, a first grader in the Bronx, music has given him so much more than a voice; it has given him the stamina and self-confidence to succeed in school and life. Adjusting to first grade has been difficult for Michael. He lives in a homeless shelter and lacks the stable support of a home life many of his peers have. In addition, as a child with autism Michael faces daily obstacles in the classroom. He rarely speaks or participates in class, and does not absorb information as easily as his peers.

When Education Through Music partnered with Michael’s school this fall, every child in the school began receiving general music instruction, including children with special needs.  This allowed Michael to start taking music classes, which helped him unlock a talent he didn’t know existed. Despite rarely participating in his other classes, Michael eagerly participates in his music class. Music has provided Michael with a new level of engagement he hadn’t previously experienced, and his love of music continues to grow. Even his other classroom teachers have noticed and commented on Michael’s newfound passion.

Michael’s music teacher noticed how quickly he was grasping the lessons she was teaching in her class. For instance, she’s been teaching rhythm and tempo to her first graders. When most of the class struggled to understand a new rhythm, ‘ta and ti ti’, Michael was the first student to master it. As a child with special needs, Michael often has challenges in the classroom that his peers do not. This moment of understanding a concept, and being the first student in his class to do so, has given Michael a tenacity for learning that he hadn’t experienced before. Through his general music classes and the support from his teacher, he has discovered a natural talent and is gaining confidence in himself. Without Education Through Music, Michael may never have found this passion that is helping him to engage more deeply with school each day.