It’s a time to celebrate not only the history and culture of the Arab American community, but also time to honor the contributions Arab Americans are making in education, medicine, technology, government, and so much more.

Layth discussed how he uses  Arabic music to create an immediate connection to a culture, and why it is important to him as a performer and educator to use music as a tool to create positive social change.

“There are approximately 3.5 million Arabs in the US; a large number of people from diverse backgrounds, nationalities, ethnicities and religions.

Education is one of the most vital ways to start important conversations, break down stereotypes, and create open-minded citizens, and this month is the perfect way to shine the spotlight on this ancient and profound culture.

Music can be an immediate way to create a connection to a culture, and I believe that artists should use music as a tool to create positive social change in their communities. This is why I will continue doing the work I do to represent Arabic music as a performer and educator in the US and abroad.” 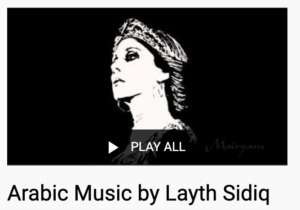 Want to hear even more great Arabic music? Check out some of these great playlists and artists.