Like a lot of music teachers, ETM teacher Alina (who teaches at P.S. 340 in the Bronx) wanted to give her students a performance experience this year.  It’s been nearly two years since many of our partner school students have performed together, and Alina knows the value of hosting a concert.

“The school culture changes [when there’s a concert]. We work together! It takes a village, not just me: it’s all the teachers, all the admin, all the students. And so we feel united working towards something. It’s more than just music, it’s creating a community.”

To keep everyone safe, the only guests in the audience were their teachers and the other student performers. The concert was recorded so that families can watch it together on demand.  But Alina wasn’t the least bit troubled.  “Let’s share our voices, even if it’s with a recording,” she says. 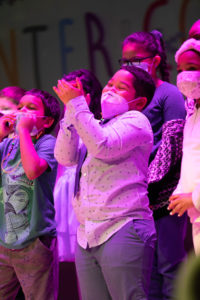 “I chose these songs because I was thinking about something that would be inclusive, and would make us think about community . . . they resonated with me; especially about coming together even though we might be different.”

“And that’s very much related to choir,” she adds. “Everyone’s so different, yet our voices come together and we sing [together].”

To avoid concert fatigue, Alina made sure to keep rehearsals interesting.  Sometimes she’d have the students take a movement break, and sometimes she’d ask them to talk about the lyrics, rather than sing them.

When she was teaching them I Lift My Voice, she asked her students: “What does it mean: When I lift my voice, let it be for good; and let me care as much as I know I should?”

“And they’re like, that means being kind to each other.” she shares.  She adds that they say, “When we see someone being mean, we say: ‘hey, we don’t do that!’”

The concert, which was performed on Friday, December 16th, was a total success.  Although, since it was some kids’ very first concert ever, there were a few concert norms they missed. Alina says she tried to explain “applause” to all of her singers: “You accept the clapping. You don’t clap.”

But some kids couldn’t help themselves, clapping their hands gleefully after every song, whether they were in the audience or on stage.

And really, who could blame them? We all deserve a round of applause this year.