Every June, the LGBTQIA+ community comes together to celebrate Pride Month.

While today we celebrate Pride Month with parades, festivals, and concerts, Pride Month was established in tribute to those involved in the tragic Stonewall Riots, which took place in New York City on June 28, 1969. It is a recognition of the work so many people have done–and continue to do–to create a future without discrimination, a future where all people have equal rights.

In fact, “The Fight Continues” is the theme of this year’s NYC Pride celebration.

At Education Through Music, we understand the fight for equality, and stand with our LGBTQIA+ community.

Pride Month is a time to inspire, educate, commemorate, and celebrate the diversity of the LGBTQIA+ community.

Continue reading for a list of our favorite resources to help educate yourself and your families about the LGBTQIA+ community. Learn about famous LGBTQIA+  icons, listen to some of our favorite artists, and check out a list of songs perfect to share with your kids!

Through our mission, we will continue to fight to help bring access to high-quality music education for ALL students no matter their background or circumstances–including who and how they or their families love.

Hopster is a great resource for kids, giving them a fun visual for learning about different topics. This video is a wonderful song celebrating love, and the diversity of modern-day families and relationships.

A Mighty Girl blog visits songs celebrating living authentic lives. This top 10 list breaks down songs that have been adopted by the LGBTQIA+ community that expresses their struggles and highlights their hope for the future. Each song includes notes about the song, and which age groups certain songs are appropriate for.

Learn more about the history of Pride, resources, and your guide to Pride events happening around New York City!

“Don’t’ Stop Be Now” by Queen is a great song to share with kids during Pride Month.

Freddie Mercury is one of the most iconic performers of our time! He began taking music lessons at the age of seven, where his love of music took off. Freddie’s band Queen released their debut album in 1973, and went on to be an international success. “Bohemian Rhapsody,” arguably one of their most recognizable songs, almost wasn’t released as a single! With Freddie’s persistence, the song went on to become an anthem for generations.

In 1987, Mercury was diagnosed with HIV, but many around him were unaware he was suffering. During that time, LGBTQIA+ people were not represented by the media, and there was a stigma against homosexuality. Mercury pushed boundaries, and helped raise awareness for the disease, and helped many in the LGBTQIA+ community.

Freddie’s unique talents, incredible voice, and unmatchable stage presence helped solidify Queen as one the the greatest rock bands of all time.

“Little Monsters’ everywhere clamor for Lady Gaga’s messages of inclusion and support for the LGBTQIA+ community. Her inspiring lyrics, and over-the-top performances have made her one of the most beloved musicians of our time.

Lady Gaga began playing the piano at age 4, continued performing at open mic nights as a teenager and studied at New York University’s Tisch School of the Arts.

“Believe” has become an anthem for many in the LGBTQIA+ community.

Cher’s strength, ability to reinvent herself, undying support for the LGBTQIA+ community and let’s not forget her show stopping Bob Mackie costumes) have made her a symbol for many across the world.

Through variety shows, movies, and of course her music, Cher has continued to reinvent herself over her nearly 6-decade long career. Did you know that when Cher was in the 5th grade, she produced, directed, choreographed, and starred in a production of Oklahoma for her class!

Cher was an early ally of the LGBTQIA+ community, and continues to support the community through her 8th decade.

“I’m Still Standing” remains an anthem for many across the world.

In addition to his contributions to the music industry, Elton John, who has been openly gay since 1988, is a generous philanthropist. He founded  the Elton John AIDS Foundation in 1992 to help fight disease which has affected so many in the LGTBQIA+ community.

With over 300 million records sold, Elton John is one of the best-selling musicians of all time! 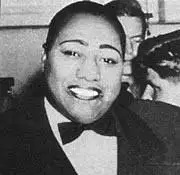 Gladys Alberta Bentley was an iconic entertainer during the 1920s Harlem Renaissance.

Aside from being an incredibly talented singer and pianist, Gladys was also famous for performing in drag, sometimes backed by a chorus line of drag queens. Her signature tuxedo and top hat made her distinctive in her era. Her voice was distinctive, too: a deep, growl and a trumpet-like scat.

While Bentley was openly lesbian early in her career, she came under incredible pressure to conform later in her life, and claimed publicly to have been married to men, whom she said she loved. Whomever Bentley chose to love throughout her live, we are thrilled to celebrate her courage and fortitude!

Check out this Spotify Playlist highlighting gay icons and anthems!