Voices from our Junior Development Board - Ivana Tay 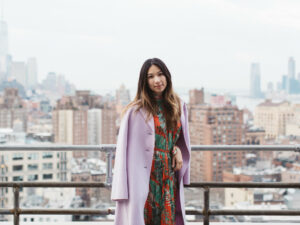 This month we sat down with Ivana Tay, a member of our Junior Development Board, to learn more about her motivation and experiences in supporting Education Through Music and our mission. ETM’s Junior Development Board is a group of young professionals who advance our work with networking, fundraising, and partnership initiatives.

Tell me about yourself. How did you get involved with Education Through Music? What’s your relationship with music?

In terms of my relationship with music, my mom was a piano teacher when she was younger and played piano all throughout my childhood. Then in the fifth grade, I had a choice of several instruments to play at school. My dad happened to have a violin, so I ended up selecting that instrument, and stuck with it through middle and high school, playing in the school orchestras. My music education played a significant role in how I grew up and it’s something I certainly miss in my life, so I was really excited to get involved and give back to the NY community through music, especially as a newcomer to the city.

Why did you get involved? What interested you about ETM?

I was interested in getting involved in the local community in New York and came across ETM. When I reached out, I had a really great conversation with ETM staff, and shortly thereafter they invited me to visit one of the schools. I was able to witness a class and observe the music teacher leading the kids through the music curriculum and music theory, and saw firsthand the impact that music education has on children.

Working to provide equal opportunities for underserved communities has always been an important focus for me, and knowing that most of the students at ETM’s partner are students of color or are from low-income communities, made it clear that this was an organization that I wanted to support.

Also, coming from the tech world and working at Google at the time, I was interested in finding ways to leverage whatever resources we had to support ETM in their pathways forward and build more brand awareness, particularly among my peers of young professionals in the city.

What’s been your role on the Development Board? How has it evolved over the years?

Right after I joined the Board, I was involved in its recruitment efforts, and conducted interviews with potential Development Board members to ensure we were recruiting the right folks to get involved. Then in early 2020, I became the co-chairperson of the Board and collaborated upon a more formal structure, a cadence for meetings, and pillars and committees to set a foundation for the group. When the pandemic began, we pivoted and began to support ETM digitally through fundraisers on Facebook and social media, as well as hosting virtual concerts to generate funds. Through the pandemic, admittedly it was difficult to maintain consistency because of the lack of in-person events and the fact that people were leaving New York City. Nonetheless, I am excited that we are back in full swing with strong leadership and forward momentum.

Have you been able to visit schools and see the program in action? If so, what was that experience like?

I have, and it was my first time in a school in a very long time. I forgot what it was like to be in the hubbub of walking down the hallway during the school day! My visit was to a general music class and it was so fun seeing how engaged the kids were. The teachers’ were inviting students to volunteer and lead parts of the lesson, and it was incredible to see how that kind of engagement was building up their confidence. The students were able to stand up, dance around, move – so much more physical involvement compared to other core subjects – and I could see the lasting impact this type of music education can have on kids.

Also, given the attention span of kids of that age, I could see how creative the teacher was in maintaining a level of excitement among the students and at the same time ensuring they stayed focused and attentive. The teacher had so much energy and was able to adapt and be responsive to the different needs of students in the class. Overall, I saw how important having this music class was to these students.

How would you like to see ETM evolve in the future?

Primarily, I would like to build more strategic partnerships. I believe there are different ways to bring attention to the cause and attract more supporters, as well as find adjacent industries to partner with. There has been a lot of focus on music tech, and having stronger partnerships with more labels and production studios could be a smart move. I think also there is a growing space in the Web3 world, which is a new and nascent space. There may be a way to merge the paths in Web3 with what ownership in music can look like, especially by tapping into industries where there is a lot more excitement among a younger crowd, and ultimately connecting these audiences with ETM’s work. I’m also really interested in the community aspect of Web3, and perhaps there is a way to build community around a really strong mission, such as ETM’s.

Overall, I’m really proud of what we’ve done so far, especially in the climate of covid and handling a pandemic. I know that when people are fearful, one of the spaces that decision makers pull back from first is something like music education. They think it’s more of an elective and not necessary to students’ education. I would like to help change that mentality – music is not something that is just nice to have, but something that every kid should have access to.

Any calls to action you would want to encourage among our audiences of educators, schools, supporters?

There are several! A very easy call to action is to continue to donate, and it doesn’t need to be a lot. We should all continue to bring attention to ETM’s efforts and continue to advocate for equity in music education. I also believe that we should continue to ensure that what we’re teaching is culturally responsive and reflective of the communities we serve, and that we’re finding ways to integrate technology into the curriculum and music programs, so that learning is available and accessible to the students we serve.

And last, I want people to understand the social element of ETMs impact, which is so important. I was fortunate enough to build social connections and create a sense of community as a part of the school orchestra growing up. The opportunity to have the experience of coming together as individuals and creating magic as a group is something that music education uniquely provides for people. For me, it created space to build friendships, perform for others, go on field trips and so much more, and if it hadn’t been for music class, I wouldn’t have been able to have those experiences. So it’s critical we tell these stories about the long-lasting benefits of music education for young people, and how important it is for all students to have access to music in schools.

Learn more about Development Board here! Interested in getting involved? Email us at info@etmonline.org.