I am from Costa Rica, a small country in Latin America.

I was raised in the foothills of the Barva volcano, which has been dormant for thousands of years. My parents were farmers. My father had a few coffee plantations, and I grew up listening to the music they and the other workers listened to while working on the plantation. As a child, the majority of what I heard was Costa Rican folk music as well as a lot of music from other countries in Latin America.

But then something really interesting happened when I was eight and a half years old.

In 1979, a famous movie that came out of Mexico called La Niña de la Mochila Azul, about a child who was a mariachi singer. His name was Pedrito Fernandez, and the songs he sang were so catchy! As a young boy, without thinking, I would just start singing, mimicking what he was doing, and suddenly I could sing as well as he did!

People noticed this. One of my neighbors heard my voice and bought me a recording of another singer named Joselito from Spain. When I heard his music, I immediately fell in love with it, and I started imitating him as well.

My musical influences were now growing from Latin America to Spain. It was a combination of many sources, and I really loved it. But I wasn’t thinking of music and singing as something I would do for the rest of my life, that happened later.

On my first day I noticed that the children were carrying clarinets, cellos, and bases. They were painting on canvases. They were writing poetry and they were in plays.They were doing all these things… I was in heaven!

This place was made for me.

Three months into school they were producing the opera Cavalleria Rusticana by Pietro Mascagni, which is performed in Italian. I’d never heard an opera, but when I heard this, I literally got goosebumps. It was at that moment I realized that if I didn’t do this for the rest of my life, I would be a very sad person.

I started pursuing all the music classes furiously. I even asked for Italian lessons because I felt I needed to learn Italian in order to become an opera singer. I immersed myself in music. I took guitar lessons, piano lessons, composition lessons. I was in every choir they had, I was in the Latin American ensemble playing double bass, I even learned to play the accordion and a few other other instruments!

I also discovered my love for teaching. One of my high school teachers would ask me if I would watch over a classroom of young students, and I began teaching them. I was being noticed not only for my music skills, but my teaching skills as well.

In fact, the year after I graduated from high school, they hired me to teach young children.

I taught at the conservatory for four years before I came to the United States.

Costa Rica, Pedrito Fernandez, my neighbors, my family, my teachers, they all helped me develop my passion. It was in that time my passions for music and the arts and teaching were born.

Music shaped my life in so many ways.

My gratitude for music is boundless and my passion for wanting to share with others is also boundless. 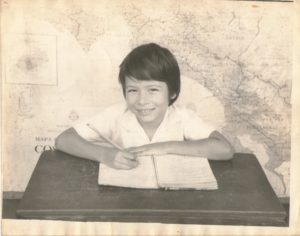