Jouney to the Violin

December 13th is National Violin day, so we caught up with one of our teachers who knows a thing or two about one of the world’s most popular instruments. Ashley D’Amico is a second-year teacher with ETM whose first instrument was the Violin.

Education Through Music (ETM): Did you always play the violin?

Ashley D’Amico (AD): So [the] violin was my first instrument. When I was in 4th grade, that’s what I started with.

ETM: What made you choose that instrument?

JK: My sneaky story is that [in school] we were able to pick 3 instruments we wanted to learn. [When brought home the form to pick], my mom signed up 3 band instruments for me and I changed it without her knowing. I erased flute or something, my number one, and put violin.

Since it was my number one, they gave me a violin. I came home and was like “look, mom! Look what I got!” and she was like “WHAT IS THIS?”!

So, that’s how I got my first violin and I have continued violin all throughout my education into college. Even though I teach general music right now, violin is still my love.

ETM: Do you still play?

AD: I do still play on my own time. I don’t really have many opportunities to play during school. I would love to join an ensemble when things open back up. I haven’t been in an ensemble since [I graduated from] college so that’s something I dream about.

ETM: Who would you say is your favorite composer for the violin?

AD: I really like Bartók, believe it or not. I really love the simplicity of the folk strings, that’s something I’m really interested in and something I want to study more. Because folk music is perfect for the general music classroom. Since I love orchestra, I want to play that on the violin, so it’s the best of both worlds and Bartók kinda hits that.

AD: Yeah, so I feel like he gets it. He serves as that middle ground between educators and students.

ETM: How would you say your love for folk song and the violin translate to your teaching?

AD: My violin upbringing was very western classical, super formal, which is why I’m so interested in Bartók because it’s a little less formal so I’m itching to expand even though I know Bartók is still European. I know that he’s more interested in the music of his people and the simple tunes that are in their culture. I find that very interesting and I love the Eastern European sound. And [me being] Lithuanian, I feel like Eastern European music is very interesting.

ETM: Do you have any fun violin stories for us?

AD: A bunch of years ago, I saw “Oh, Hello” on Broadway. And they always have a guest artist to be on their fake show. The special guest of the day for my show was Itzhak Perlman. And nobody in the audience knew who he was. And I was like “OH MY GOODNESS, AHHHHHH!”. And everyone [was so confused]. Nobody knew who he was and I was so excited to see one of the best violinists.

ETM: Finally, what would you say to a student who wanted to pick up the violin?

AD: I say they should do it. It’s not easy. There’s so many things that could go wrong, but there’s also so many things that could go right. So, if they want to do it, they should definitely go for it. You just gotta try. Honestly, I hate to say it, you gotta practice! So if you want to play the violin, you probably are gonna have trouble unless you practice. So, again, get practicing. You should’ve started yesterday.

Thank you Ashley for sharing your story with us!

Give the Gift of Music

ETM’s programs and services are made possible through the generous support of individual donors like you. Your gift contributes to making education more equitable and ensures that we make strides toward realizing our vision of a nation that has music as a part of every child’s education.

You can still support us with a tax-deductible gift today! 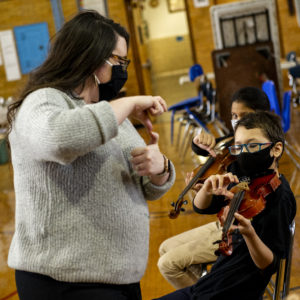